Before I started eating keto I ate a somewhat general low carb diet. As my stomach problems evolved I had to cut out a few specific items from my meal, such as rice. Shortly I found myself eating GI-food (we call it GI here in Sweden, do you call it something else?), you know, the diet where you can eat carbs as long as they are good carbs that keep you full, so called slow carbs. One of my problems with changing diet was giving up Thai Food. I could eat springrolls and fried rice and deep fried chicken all day long if I could afford it. Suddenly, there was only one thing on the menu I could eat without getting cramps. That was fried egg noodles with chicken and vegetables. Every time we had thai food, that was my meal. Number 72. Mmm, I want that so much right now...

But giving up thai food was easier when my mother in law did a homemade wok that tasted great. It sure didn't taste as the one I was used to eat, but it was still awesome. It is a very adaptable recipe as you could swap any ingredient you want as long as the core stays the same. I suppose I could tell you that just this moment, when writing the recipe I noticed I forgot the broccoli and shredded cabbage in my wok :( I blame my pre-dinner meeting that kept me pre-occupied after. But you know what? It was still delicious.

I know that a lot of vegetarians are conservative with stock, broths and such. With all rights. I am new to this diet and even though I noticed my ethics to change over the last month (for example, I planned to eat fish every now and then, but that sort of repulses me now) but the one about stock hasn't changed yet. Therefor this recipe has a bit of chicken fond in it (concentrated stock) but you can swap that to vegetable one of exclude it with no problem. I will next time. 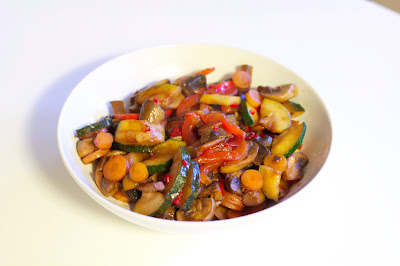 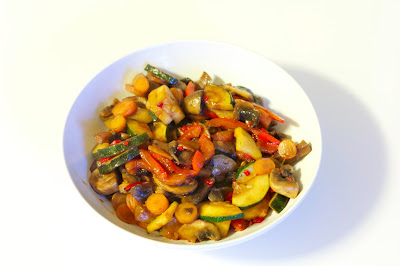 RECIPE for a biiiig bowl of wooked greens.

Miss Shiz
I am a 27 year old Swede with a newfound lifestyle. I like cooking and taking pictures and hope to share some inspiration with you guys! If you are american you will have to convert the recipes yourself and the majority of the world uses another system, including me ;) PM me at reddit if you got any questions, link under header. Have fun browsing! If you got a sweet tooth, check out my main website www.AngelicaBakar.se (in swedish).